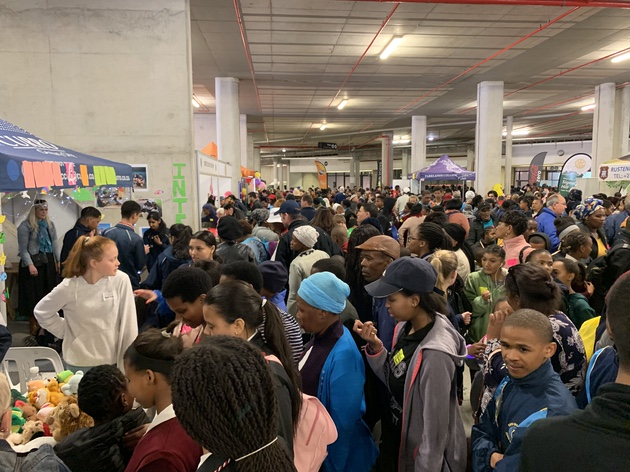 The day started off early as vendors stood queuing to get our loaded vehicles into the basement of the new Cape Town stadium. Once off loaded we quickly setup our tables for the game of Velcro ball and sorting out the mega bags of soft toys as prizes. We also agreed not to give the kids sweets but fruit as prizes.  We were fortunate to have the help of Edgemead High Interact pupils to assist with the games and prizes.

We waited in anticipation of the first bus load of disabled children that arrived late due to a marathon being held on the same morning. We were part of a huge diverse vendor group of Rotarians, Lions, private schools and even religious groups. It was heavy going as we had a large crowd around our table and had to make sure nobody got lost etc.

We the vendors, were all there with a common goal of giving back to the less fortunate. So, if you were not aware that for every disable kid there, was with one able helper. So, you can imagine the huge crowd of mixed ages and disabilities.

The object at our table was to throw a few balls at a target and every person then was awarded a prize. Interesting enough some of the kids were more interested in the fruit that a soft toy!

Well words cannot explain the joy on these kids faces, when they all walked away with some sort of prize.

We worked in two shifts as the busses brought a new load of kids just after lunch.

A great time was had by us all and rather exhausting by the time your shift ended.

So, a note to all those schools who donated these soft toys, making this day possible.

Without your donations none of this would have been possible. Also, to the great team at Goodwood Rotary for pulling together with their own kids and wives roped in to help.

A fantastic day was had by all we are looking forward to next year’s one to one.